this peicture is a fake art peice that I rcreated to illustrate the story which i have just written.  I hope you enjoy them.  I am still on the road but had a day that I could take it easy so i created the picture from a few pictures I had found on the web. the characters havbe had there appearances altered and art techniques were overpainted.
Posted by tommyspt at 8:48 PM 4 comments:

Spanked before your Mother iIn Law 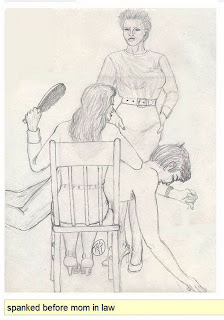 sorry but I am traveling again for the rest of the month.  I have added my latest drawings.  Please feel free to write a story or a comment.  will be back the beginning of july.
Posted by tommyspt at 12:50 PM 3 comments: 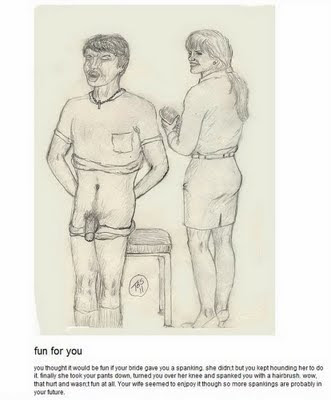 Sorry but I am unexpectedly traveling again on family business.  I am adding my newest drawings.  I should be back by the start of july.  Please feel free to caption or comment on the drawings.  thanks for your understanding
tommyspt
Posted by tommyspt at 12:44 PM 1 comment:

You are not too old. 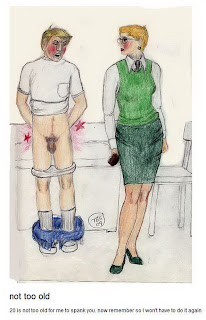 I am sorry that the month of may was so busy for me.  I was expectiing to have time for all kinds of things but I ended up traveling most of the month on family business.  Nothing life threatening but still important.  I am hoping that this month will give me more time for my artistic persuits.
I am sorry also that I seem to be having writers block and cannot seem to be able to come up with stories at this time.  Please feel free to write a short story to go with the picture that I have drawn.  HE had told his mom that he is just too old to be spanked anymore.  He is now away at college and a man of his own now  She showed him that he was not too old and  said that she will show him again anytime that she feels a sore, hot bottom will benifit him.
Posted by tommyspt at 6:14 PM 4 comments: