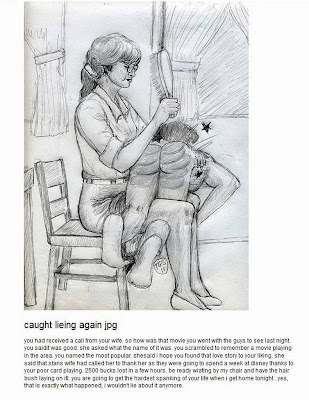 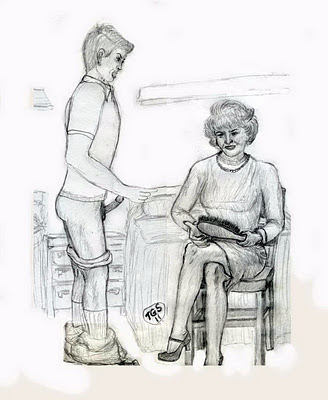 wow,  I couldn't believe it.  I had been out of high school 10 years already,  I had gone to college, got a degree after a short stint in the army for my country.  things were going real well so I was looking forward to seeing some of my old friends and find out how things were going with them.  I should probably say that the was 1972.  lYes I am oplder than most of the readers of this blog and that I had gone to school in a time when corporal punishment was still a choice you could make for discipline, at least when i was in junior high school.  grades 7 through 9,  I should also state that i was a confirmed spankee and was not unfamiliar with the sting of a hairbrush.  any how i tend to get either ahead or reminicent about the story is am writing.
I had read the list of folks that were going to be there and saw many friends listed.  I was real happy and kept reading about the guests that were going to be there.  the high school principal and some of the teachers and i was very surprised that the jr high principal and Miss C were going to be there also  well about a third of the kids I graduated with had all gone to the same jr high that i did.  Seeing Miss C listed immediately brought back some very warm bottom memories to me.  She was the music teacher and assistant principal at the junior high.  She supervised the detention room after school and always offered either lines or a paddeling or spanking,  She sat at a desk in front of about 12 desk seats the students used in classes. she  had a collection of large books on the front of her desk and a large file cabinet beside her desk.  I can remember plain as day a blackboard that had a  long three line sentence that she had everyone print neatly 150 times for lines.  If you choose lines you were going to be there for at least two hours to complete the lines and if they were messy or misspelled she would see you again the next after school day...
MIss C was tall, attractive and a very pleasant lady and also a very good teacher.  I learned alot about music in her class and also got to know her lap and spanking technique very well also.  she would call your name when detention started and ask you to choose one of the three punishments.  I always chose a spanking.  she gave a pen and paper to those that chose lines.  then would call the person to be paddled to come to stand behind the file cabinet.  paddeling  had two choices. 4 bare or 6 over clothes.  usually the miscreant would drop there pants and shorts and then mend over the back of Miss C's chair.  people in front of the desk could only see the top half of the spankee but could see and hear the paddle swing and the spankees reaction to it.  how anyone could concentrate on writing lines was beyond me.  when i was called to be spanked i would go stand behind the file cabinet and drop my pants and undershorts.  she would then push her chair back and smooth her skirt over her lap.  She would then open her drawer and take out her large hairbrush that she kept in the drawer.  most spankees just got a hand spanking but where i had smiled thru my tears at her after my first spanking from her she decided that when i was to be spanked i need  harder and more severe spanking to be gotten through too.  She then would signal me to get across her lap and then she would spank me pretty severely and i yelled and wiggled and eventually even broke down and cryed.  when she finished she would keep me across her lap while i started to compose myself and then help me up behind the file cabinett.  she would then give me some tissues  to wipe away the tears and then she would say.  ok now get out of here and see if you can behave so i don;t have to spank you agian for some time.  it seemed i was there about once a month.
At the reunion i was having a great time.  old friends and storys to tell.   I kept looking over at Miss C.  She still looked real good,  tall and firm and i noticed that she still had a very nice, comfortable looking lap.  She saw me looking at her and beckoned me to come over.  I got extremely nervous but i went and stood in front of her and told her how nice it was to see her again.  i was surprised when she asked me if i still enjpyed being spanked.  i stuttered and blushed a real dark shade of red to which she said that she knew every time that she had spanked me that i had enjpyed it eventhough it hurt..  she said that thru the years she had many boys and some girls that used to get in trouble hust to get spanked by her.  I stammered that yes I was one of those boys and that i really missed the spankings that she gave me.  she told me that if i wanted she would give me her hotel room and i could come for some discipline and and a chat the next night.

I went, i was spanked by her so hard i thought the people in the room next to her were going to complain.  she answered a knock and i had to stand up and wait while she told the neighbor at the door that she was giving a spanking to a student who had about 14 years of spankings to make up for.  the woman peeked in.  saw me standing there next to the chair and said  that she should carry on but please don;t go beyond mid night.  any how she finished my spanking.  we had a lovely chat and i headed home happy and very warm bottomed.
Posted by tommyspt at 9:08 PM 2 comments: