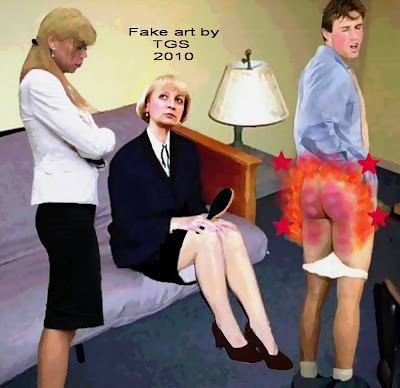 Ok.  You screwed up again,  this time it cost your company a large contract that  the client took to a competitor.  As  you had agreed that any company related issues would be handled by your boss and her manager you had found yourself again over her knee as she chatted with you about how you could have done better to keep the client from going elseware with his order.  It was a real long spanking and her manager had encouraged her to spank you even harder as obviously you had not learned you lesson last week when you had found yourself in the same position. now that your spanking is over the manager will inspect your bottom and quiz you on how you can do a better job in the future.   she suggests that although your bottom is really red and blistered that you probably should be spanked again tomorrow after work.  Your boss quickly  agrees that although you are in pain and very compliant right now you will probably fall back into your old ways withina few days.  the surprise is that the manager is going to administer tomorrows spanking and then the boss will also apply some strokes with a good thick strap after.  more discipline sessions will depend on how well the lesson is learned over the next week. your boss looks at her manger and then she winks and says that it is a lucky thing for you that your mom owns the company otherwise they would not be spending this extra effort to set you straight.  you just sob and agree todo what ever they think is necessary to straighten you out.

this is a fake art picture created by tommyspt.  fake art is made by taking several pictures,  cutting and pasting them into a new scene and then overpainting to creat the desired effect.  I hope you enjoy it as much as i do making them.
Posted by tommyspt at 5:47 PM