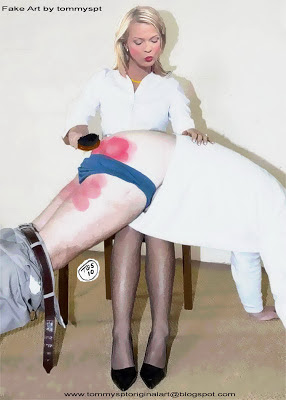 She then uncrossed her legs,  smoothed her skirt and invited me to assume the naughty boy position that I know so well.  Her thighs support my weight with her left thigh at my somach and her right thigh midway down my thighs.. her legs are spread slightly so that I receive no stimulus in the penis area.  It just hangs between her thighs.  She had me place both hands on my back and held both thumbs in her left hand.  that makes almost like chinese handcuffs and you cannot move either hand.  She rubbed and patted the brush against my cheeks and I tried to push down on her thighs to get away from it.  She patted a few more times and said that i was wrong to even think about taking money from our account to play card, especially as she had only stopped last week with the spankings I got for that game.  Then she sighed and said," I think this may work as a reminder to let me know your plans.  I will spank you this way every time you forget or are only half truthful in your plans."  with that I felt het stop patting my back side.  I felt her shift slightly and then there was an explosion of sound and pain as the brush stung my right cheek.  I tried to push away but she had me firmly in place .  the stirred again and the left cheek started to burn.  I yelped. then the spanks started falling about 1 per second,  I was starting to wiggle about.  I felt two more smacks on my thighs.  I yelped and begged her to please stop.  "Ha, I have just gotten started.  buckle down,  this spanking will not be long but it will be efficient", she said.   That brush kept smacking and I was really dancing on her lap.  More smack to the thighs and I tried laying still again.  a few more smacks and I was dancing again.; more on the thighs..  I was really begging for it to stop now.  she paused.  "Are you learning your lesson?  Will you remember to tell me your plans in the future?  Will you never play cards with the money in our account.  If you can save some on your own then you can play but you had better never lose more than you have on you.  When I finish this spanking you will be allowed to go out but you will be home right after bowling.  If you are not home by nine thiry this evening I will assume you have forgotten and I will give more preventive maintinamce reminder spankings every night until I am sure you can remember.  We will also start the weekly maintenance spankings every sunday evening again so the night after tomorrow you will get the first..  now I am going to end tonights spanking with fifty hard fast spanks that will include your thighs also.  Hold tight and try not to move."  All hell broke out then and for about 30 seconds I was exhaling only as each smack lit another hellfire. Then it was over.  I was crying,  tears were streaking my face.  I laid there for a few minutes trying to control myself enough to get up.   Finally she helped me up.  "Stand there," she said.  she went to a cabinet and got some skin cream.  She had me go back over and rubbed it in.  I thanked her for the time she spent correcting me and also for the skin cream.  I knew from experience, no cream and blisters and such would crack and be more painful.  "All right, she said.  pull them back up,  go wash your face and comb your hair,  You look like a naughty little boy who just got a good spanking.  you need to get control of your self so you will not embarrass yourself with your friend.  Try not to squirm to much trying to sit on those hard seats at the bowling alley.  I will see you by nine thirty or I will call your mom and your sister to come and assist me while we impress how important you letting me know your plans are.  When you are ready to leave come kiss me and  I will check that you are presentable."


Thus started a new phase of discipline for poor Tommy. so you think he will remember or will his sister and mom have to take part in his learning experience.


This is a fake art picture I created to illustrate this story.  it is made up from parts of other pictures and over painted to disguise the original portions used.